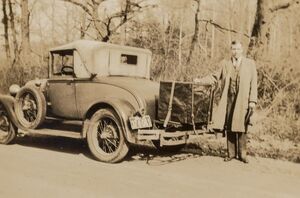 Arthur Kyle Davis, Jr. (September 20, 1897 – September 17, 1972)[1] was a professor of English at the University of Virginia specializing in American folklore, and a significant contributor to the Virginia Folklore Society.[2] He completed a bachelor's degree at Virginia and was in the Virginia Glee Club during the 1916-1917 season, during which he served as secretary. He was the author of several books on Virginia folk ballads, including Traditional Ballads of Virginia and Folk Songs of Virginia, and composed the lyrics to the UVa song "Vi-ir-gin-i-a" (set to a tune by George Frederic Handel).[3]

Davis's parents founded the Southern Female College in Petersburg, VA. He completed his bachelors degree at Virginia in 1917, where he lived in 47 West Lawn[4] in 1914–1915 and 9 West Lawn[4] in 1918–1919. During the 1918–1919 year, he served as a second lieutenant in the US Army in World War I. Following the War he enrolled at Oxford University as a Rhodes scholar and completed degrees in economics and political science at Balliol College. He became an instructor in English at Virginia in 1923-1924, was promoted to assistant in 1924, associate in 1927, and full professorship in 1940.[1]

Davis's research, collected in Traditional Ballads of Virginia, Folk Songs of Virginia, and More Traditional Ballads of Virginia, showed that the English and Scottish ballads listed and enumerated by Harvard folklorist Francis J. Child (the “Child Ballads”) were known in America for hundreds of years before their collection and numbering by Child.[5] Among his students were folk singer and song collector Paul Clayton, whose song "Who's Going to Buy You Ribbons (When I'm Gone)" was famously reused by Bob Dylan for "Don't Think Twice, It's Alright."[6] Davis is buried in the University of Virginia Cemetery.[7]

Davis in 1932, as shown in the liner notes to Virginia Traditions (Folkways BRI-002)