The Cabell House was a boarding house near the University of Virginia, whose members formed the earliest incarnation of the Virginia Glee Club in 1871.

Jefferson’s original university design had 54 student rooms on the Lawn and a similar number on the East and West Ranges, holding somewhere between 150 and 200 students (assuming double residency for all the Lawn rooms except the Bachelor’s Row). The growth in University attendance from 128 in 1842-1843 to more than 600 in 1856-1857 (figures from Philip Bruce’s History of the University of Virginia vol. III), combined with the lack of further dormitory space, led to a growth industry in Charlottesville boarding houses.

One of these was the Brock Boarding House, later known as the Cabell House.[1] The two-story brick structure was located at 852 West Main Street,[2] and appears to have existed under the name of "Cabell House" as late as 1917, when it was mentioned in an Alumni Bulletin article.[3] When offered for sale in 1884, it was described as "The large and valuable BRICK BUILDING. on University street, known as the "CABELL HOUSE,"containing some 15 or 18 rooms, lying near the Union Depot and supposed to contain about one-third of an acre of land, with the necessary out-buildings. This property is very desirable either for a hotel or boarding house."[4] According to a 1909 record, it could house as many as ten men and 25 women, and offered both room and board.[5]

The house was later called the “Stumble Inn,” and ultimately was razed. Today the block hosts apartments.[6]

The Glee Club’s formation wasn't the only brush with fame the Cabell House had, however; it was also infamous as the site where John Singleton Mosby, later famous as the Confederate raider known as the Gray Ghost, shot fellow University student George R. Turpin.[7]

The following people were identified as proprietors of the Cabell House: 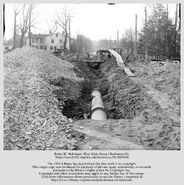 West Main Street, 1918, showing Southern Railway excavations with the Cabell House in the background.
Add a photo to this gallery

Retrieved from "https://virginiagleeclub.fandom.com/wiki/Cabell_House?oldid=39687"
Community content is available under CC-BY-SA unless otherwise noted.