After graduation he was employed as a salesman. He enlisted as a warrant officer in the US Army in World War II.[3] 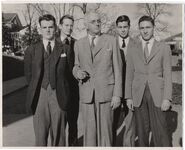