The 80th Annual Christmas Concert of the Virginia Glee Club, released on December 18, 2020, was the Glee Club's first full virtual concert and its first concert length performance of the Glee Club 2020-2021 season. Assembled as a virtual choir performance with the help of a grant from the UVA Parents Fund and donations from alumni, the concert premiered on the Glee Club's YouTube channel.

The program featured two performances by the Virginia Gentlemen, as well as guest appearances by Glee Club alumni on "Winter Song" and "The Twelve Days of Christmas." The latter two performances were also released as individual videos, along with "Wassail!". 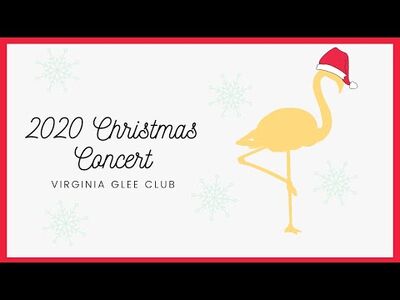 Retrieved from "https://virginiagleeclub.fandom.com/wiki/Christmas_Concert_(2020)?oldid=39205"
Community content is available under CC-BY-SA unless otherwise noted.