The Concerts on the Lawn of the Virginia Glee Club are free outdoor concerts held on The Lawn at the University of Virginia. Typically held in late spring after the Glee Club's spring concert, and always on an afternoon, the Concert on the Lawn is usually free and open to the public. The Concert on the Lawn is usually held on the Rotunda steps, though in some years the concert was held in other locations in the Academical Village. In particular, the restoration of the Rotunda in the early 1970s caused the concert to move to the steps of Old Cabell Hall in 1973 and 1974, and to the McIntire Amphitheatre in 1975. The rain site of concerts on the Lawn is generally in Cabell Hall Auditorium.

The first modern Concert on the Lawn was held in 1936 and was created by Harry Rogers Pratt as a community singing exercise, and as a way of bringing the "step singing" tradition of outdoor song, which had been observed at Harvard, Yale and Princeton since the 1910s, to Virginia.[1] Pratt's first Concert on the Lawn featured open containers, as if the Glee Club members had just come from a party, and ended with Club returning to the party as "the other keg" had arrived.[2] An account of the concert from 1938 by Daniel A. Jenkins in the Virginia Spectator recounts:

Two years ago, during their annual final meeting and beer party, the Glee Club suddenly adjourned to the Rotunda steps to regale themselves with a brief song or two. And there, under a shimmering moon and mingling with the proverbial purple shadows of the Lawn, the sweetly lusty tones of "Sweet Adeline" resounded from pillar to pillar and rolled majestically down the moon-lit greensward in an ever increasing swell of tenor and bass. The door along the Lawn were flung open and little clusters of figures merged together in the dusk to listen. Students who had been cramming for exams in the Library laid down their books and joined the small crowd of onlookers who were slowly gathering around the steps. The Glee Club, inspired by this unexpected audience, went through almost its entire repertoire, and for over an hour the merry sound of song broke into the sombre atmosphere of study and provided a delightful respite to exam-worried students.[3]

Subsequent Glee Club conductors have added to the tradition, which appears to have been revived by David Davis. Donald Loach notes:

In the early 1960s David Davis instituted a Concert on the Lawn in late spring.  When I came on board I continued the tradition from 1965-1989. These concerts were sung primarily from the Rotunda Steps although I did hold them for a few years on the steps of Old Cabell. Davis's concerts were intended for a student audience and were held, I think, on a Friday afternoon. I refocused them to be family oriented on Saturday afternoons and included fun songs for everyone to sing.[4]

During Loach's tenure as conductor, the concert sometimes included piano accompaniment; a 1977 newsletter shows the Club members transporting a baby grand up the Lawn from Old Cabell Hall to the pavement in front of the Rotunda for the concert.[5] By the time of Michael Butterman's tenure, the audience participation included an audience-assisted performance of "Old MacDonald Had a Farm." In a twist on the Glee Club commission series inaugurated by John Liepold, Lawn concerts during his tenure included a cappella style arrangements of classic rock songs for the entire Glee Club, including performances of "Freebird" and "You Can't Always Get What You Want."

Guest groups were common at the Concerts on the Lawn. Up until the late 1980s this spot invariably was held by the Virginia Gentlemen, which was part of the Glee Club until 1988. After that time, the guest spot rotated among various a cappella groups at UVa, including an appearance by the New Dominions in 1994.

In recent years the Concert on the Lawn has not been part of the Glee Club season; the tradition died out during Bruce Tammen's tenure as conductor during the late 1990s and has not been revived. 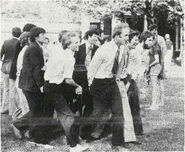 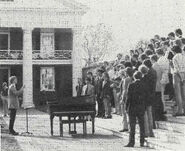 Retrieved from "https://virginiagleeclub.fandom.com/wiki/Concerts_on_the_Lawn?oldid=24807"
Community content is available under CC-BY-SA unless otherwise noted.