The season is attested by a surviving concert program from a combined concert of the Banjo, Mandolin and Glee Clubs, given in the Public Hall in the Rotunda Annex on December 17, 1891,[1] and by a note in the Virginia University Magazine December 1891 edition, which laments the "meagre attendance" at the performances of the group:

The Glee and Banjo Club! The lack of college spirit! The impracticability of carrying out successfully any college enterprise without the cordial support of all the students! It is one of the same old appeals with which our pages have bristled since first we came to the editorial chair, that again we would make on the eve of our departure from the sanctum. Through the energetic efforts of several of the students a Glee and Banjo Club was organised at the beginning of the present session. It was the first attempt that had been made to perfect such an organization since the session '89-'90, and the success of the effort was clearly demonstrated on the occasion of the first concert given by the Club. And here we would remark on the lack of college spirit. Though for days before the concert posters were to be seen on every bulletin board in the University, and handbills were distributed throughout the University and the town, and though Topics made generous efforts to herald the event, the audience that greeted the Club at its first entertainment was meagre, so meagre, indeed, as to excite general comment. As we have frequently remarked before, such a state of affairs is deplorable. What encouragement is there given to men who have sufficient self denial to organize enterprises for the advancement of the college's interests in the fields of literature, music or athletics? Some one, cavilling, will be inclined to say that support is given to athletics, even if the musical and literary organizations are neglected. We are prepared, however, to prove by facts and figures the statements made in regard to athletics as well as in regard to Glee Club and literary work. Enterprises have repeatedly failed that well deserved the support of every man in the University. Such a condition of affairs will continue to exist as long as the men here are governed by self-interest alone.[2]

The list of members below reflects those who were identified on the concert program for the 1891 Opening Concert and may not reflect all members who sang with the group during the season.

** Listed in the Opening Concert but not in Corks and Curls. 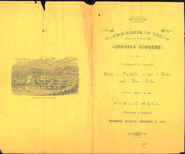 Add a photo to this gallery

Retrieved from "https://virginiagleeclub.fandom.com/wiki/Glee_Club_1891-1892_season?oldid=21524"
Community content is available under CC-BY-SA unless otherwise noted.