Start a Wiki
The 1892-1893 season of the Virginia Glee Club was directed by Harrison Randolph. Officers included Charles Behan Thorn, president, and George Ainslie, manager (Harrison Randolph was listed as manager in the 1893 Corks and Curls).[1][2]

The roster, as listed on the publicity photograph of the group, included:

The full group roster, as listed in the 1893 Corks and Curls, included: 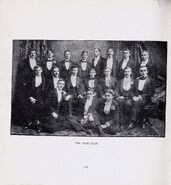 Glee Club in the 1893 Corks and Curls 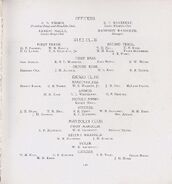 Membership roster
Add a photo to this gallery

Retrieved from "https://virginiagleeclub.fandom.com/wiki/Glee_Club_1892-1893_season?oldid=18139"
Community content is available under CC-BY-SA unless otherwise noted.