The 1893-1894 season of the Virginia Glee Club marked an important transition in the Glee Club's history. This was the first year that the club (as the Glee, Mandolin, and Banjo Clubs) toured widely outside the University community, and the first time the group was covered in national press, as the tour was covered in the Atlanta Constitution. Harrison Randolph was the director; Bernard W. Moore, president; W. H. Saunders, vice president; Ed. F. Mayberry, chairman of mandolins; McLane Tilton, Jr., chairman of banjos; and William B. Eagles, chairman of voice. Other notable members included E.A. Craighill, author of The Good Old Song. 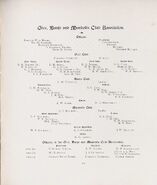 Roster from Corks and Curls 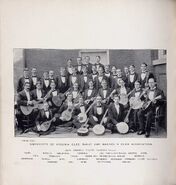 Group photo from Corks and Curls 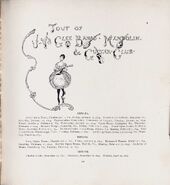 Tour listing from Corks and Curls

Community content is available under CC-BY-SA unless otherwise noted.