The Glee Club held a number of performances in the greater Washington area, achieving some press coverage in the Washington Post, Washington Times, Washington Evening Star, and Baltimore Sun.[2] They also appeared in a Fox Movietone newsreel performance.[3] The final concert of the season, held April 13, 1929, was a joint concert with the Harrisonburg State Teachers' College Glee Club.[4]

This roster is complete as of the 1929 Corks and Curls and may not include all who participated in the season. 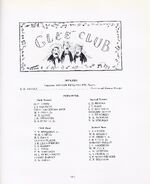 Retrieved from "https://virginiagleeclub.fandom.com/wiki/Glee_Club_1928-1929_season?oldid=28002"
Community content is available under CC-BY-SA unless otherwise noted.