The 1935-1936 season of the Virginia Glee Club was directed by Harry Rogers Pratt. The season was celebrated as the Glee Club's 50th anniversary season, meaning that the group of 1935 was dating itself from 1886 (this date is not supported by current research). The season's performances included a tour to New York City and the first Concert on the Lawn.[1] 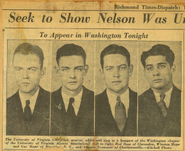 Press clippings from the 1936 season.

This roster includes members listed in the program of the Concert at Richmond Women's Club (1936) and the 1936 Corks and Curls, and may not include all the members who participated in this season.