The 1965-1966 season of the Virginia Glee Club was Donald Loach's second as director and featured the 25th annual Christmas Concert. Peter Zwanzig was president; Gary Cook was Business Manager; Kit Schooley publicity manager; and Brian Fatzinger was librarian. Delmas Moore was the accompanist.

This is the roster as of the 1965 Christmas Concert and the Spring Concert (1966) and may not include all members of the Glee Club who were active during this season. 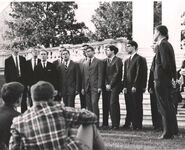 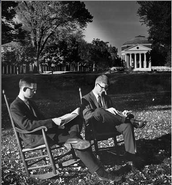 Glee Club members Jerry Lee Coffey and Robert McCullough on the Lawn
Add a photo to this gallery
Retrieved from "https://virginiagleeclub.fandom.com/wiki/Glee_Club_1965-1966_season?oldid=36544"
Community content is available under CC-BY-SA unless otherwise noted.