Then-Governor L. Douglas Wilder issued a certificate of recognition for the Glee Club during this year that read:

WHEREAS, the Virginia Glee Club of the University of Virginia is proud to host its 50th annual Christmas Concerts on December 7 and December 8, 1990; and

WHEREAS, 1990 marks the 120th season of concert performance by the Virginia Glee Club at the University of Virginia; and

WHEREAS, the music and talents of the Virginia Glee Club inspire those who attend the concerts; and

WHEREAS, the songs and melodies sung by the Virginia Glee Club express the magic of the holidays and carry the message of joy to the world;

NOW, THEREFORE, I, Lawrence Douglas Wilder, Governor, do hereby recognize the VIRGINIA GLEE CLUB, congratulate the members who are dedicated to the traditions celebrated during this 120th season, and send to each my very best wishes for a memorable 50th Christmas Concert series.

The certificate now hangs in the living room of the Glee Club House.

This season roster includes members who performed in the 50th Annual Christmas Concert and may not include all members who participated in the season. 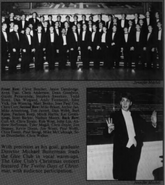 Glee Club group photo and Michael Butterman
Add a photo to this gallery
Retrieved from "https://virginiagleeclub.fandom.com/wiki/Glee_Club_1990-1991_season?oldid=37409"
Community content is available under CC-BY-SA unless otherwise noted.