The 1993-1994 season of the Virginia Glee Club featured the Tour of the Northeast. The musical focus for the season was the performance of a previously unrecorded work by Renaissance composer Cristobal Morales, the Missa Ave Maria. John Liepold was the director. Officers were: Donald C. Webb, president; Derek Ramsey, vice president; Jonathan Finn, business manager; and Tim Jarrett, secretary.

Home concerts during this season were held at University Baptist Church during the renovation of Old Cabell Hall.

At the end of the season and again in 1995, the Glee Club participated in recording sessions toward a project tentatively called "Marian Echoes." The project was never released, but the masters are held by the University of Virginia Library.

Recruiting mailer for summer students, 1993 (back) 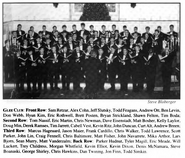 Glee Club group photo and roster, 1994 Corks and Curls
Add a photo to this gallery
Retrieved from "https://virginiagleeclub.fandom.com/wiki/Glee_Club_1993-1994_season?oldid=37619"
Community content is available under CC-BY-SA unless otherwise noted.