The New Dominions is the oldest co-ed a cappella group at the University of Virginia in Charlottesville, Virginia. Founded in 1990, the completely student-run group performs a diverse repertoire of vocal music within the University community, around Charlottesville, and along the East Coast. The group has been nominated for Favorite Mixed Collegiate Group in the 2010 A Cappella Community Awards of the Contemporary A Cappella Society,[1] and a track from the group's 2006 recording Almost Awesome was included in the Voices Only 2007 a cappella anthology.[2]

The New Dominions, often referred to by University students as the "NewDos", was founded in 1990 by Stephen Murray, Joanna Parsons, and founding musical director and Virginia Glee Club member Burt Kann, students at the University of Virginia. The group was initially designed to teach first years the basics of a cappella singing so that they could audition for existing a cappella groups around Grounds; however, the New Dominions quickly abandoned this idea and became the University’s premier co-ed a cappella group. Today, the group holds auditions each semester that are open to all interested students at the University of Virginia.

The New Dominions hosts a concert at the University of Virginia at the end of every semester that represents the culmination of the semester's work. Every year, the University’s Fall Break is reserved for “Fall Roll”, a trip taken by the New Dominions that involves touring and performing at various East Coast colleges and universities. Additionally, the group performs throughout each semester around Grounds (namely, the Rotunda Sing at the beginning of the Fall semester, the Lighting of the Lawn at the end of the fall semester, and several "dorm sings" in first year dorms throughout both the fall and spring semesters), at fundraising events in and around Charlottesville, and at private parties and events.

The New Dominions record and release a CD approximately every two years. Since 1990, the group has released eighteen CDs, including the latest, Porch Time (2013). The New Dominions currently record with James Gammon of James Gammon Productions in Charlottesville, Virginia. The group's recordings include: 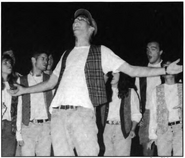 New Dominions, Singfest (2017)
Add a photo to this gallery

Retrieved from "https://virginiagleeclub.fandom.com/wiki/New_Dominions?oldid=39142"
Community content is available under CC-BY-SA unless otherwise noted.