Robert Vivian Funsten (December 25, 1892 – July 25, 1949)[1] was vice-president of the Virginia Glee Club during the ill-fated Glee Club 1912-1913 season, when the Club was forced to disband due to lack of a conductor. He returned as president in the Glee Club 1914-1915 season when the group re-formed under A. L. Hall-Quest. He went on to graduate from the University and return as a member of the medical school faculty. While at the University of Virginia, he was a member of Phi Rho Sigma, the German Club, Saint Paul's Club, Lambda Pi, PK, and Alpha Tau Omega.

After graduation, Funsten served in the US Marine Corps during World War I.[2]

Funsten remained active as an alumnus, being listed as a member of the Glee Club Alumni Advisory Board in a 1935 concert program. He is buried in the University of Virginia Cemetery. 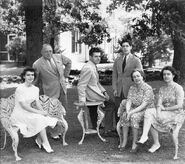 Robert Funsten and family (Funsten is 2nd from left)

Robert V Funsten
Add a photo to this gallery

Retrieved from "https://virginiagleeclub.fandom.com/wiki/Robert_V._Funsten?oldid=28621"
Community content is available under CC-BY-SA unless otherwise noted.