Songs of the University of Virginia (album)

The track listing below is that on the 33 1/3 edition of the recording. The same tracks are on the original 78s but in a different order.

From Rugby Road to Vinegar Hill, from Cabell Hall to Scott Stadium or Lambeth Field, and back again to the Gymnasium (Fayerweather or Memorial, depending on your vintage!), music and song have always played a lively part in the social life of men of the University of Virginia. Practiced or impromptu, spirited or merely spiritous (or both), music is a part of every Virginia man’s memories of the University. It has always been so.

“Music is the favorite passion of my soul,” wrote Thomas Jefferson, who founded the University in 1819, designed its unique buildings, and drew up its original curriculum—a curriculum which included a plan for a professor of music and reserved a room in the Rotunda for teaching it. Mr. Jefferson was himself a proficient violinist and the collector of an outstanding musical library, and from his University’s opening in 1825 instrumental music and singing were favorite student pastimes. That they were sometimes rowdy and off-key is attested by a faculty ruling of 1831 which prohibited the playing of musical instruments after two in the morning and on Sundays! As early as 1832 there was an informal band composed entirely of students, and by 1835 faculty resolutions were deploring occasional “disorderly singing” amont the young gentlemen.

But there has been all through the years much serious music, too. The Claribel Club, a serenading socety, was started in 1874 and seems to be the first formal musical organization. The Glee, Banjo, and Mandoline Club, organized in 1893, was another of the forerunners of today’s large and well-trained Glee Club and Band. The range of the Glee Club’s repertoire is wide and ambitious and the University Band does far more than furnish colorful backgrounds for athletic events, for its concert programs offer music of a high order.

These two competent and highly-trained University organizations have joined their talents in this album to offer students, alumni, and friends of the University a selection of representative Virginia songs of the present and the recent past. These versions, however, make no claim to be definitive, either in words or melodies. Students and alumni alike may prefer, from sentiment or long familiarity, other versions of some of them.

In this album the Band and the Glee Club have tried to reflect in song the essential spirit of the University in its lighter moods, to evoke again the happy memory of University days (and nights) which, despite the tide of years, still “cheers our hearts and warms our blood.”

The University of Virginia Band is directed by M. Donald MacInnis, the University Glee Club by Stephen D. Tuttle. The music has been arranged by M. D. MacInnis, J. E. Berdahl and S. D. Tuttle with the assistance of members of both organizations. 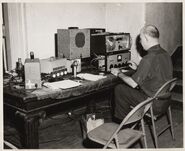 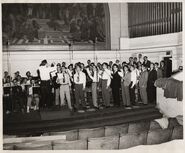 A copy of Songs of the University of Virginia is available for listening at the Internet Archive.

This article has more context at Jarrett House North, the blog of the historian of the Virginia Glee Club Alumni and Friends Association.