Thomas Deal, of Norfolk, Virginia, was president of the Virginia Glee Club during the Glee Club 2001-2002 and 2002-2003 seasons, also served as secretary in 2000-2001, and was also a member in 1999-2000. He is one of only four Club presidents to have served two terms (the others being Malcolm W. Gannaway, Randolph Conroy and E. Lacy Gibson), and the second after Conroy to serve two consecutive terms.

Deal founded the Virginia Glee Club Alumni and Friends Association and served as president from 2006 to 2015, during which time the association increased the Glee Club's endowment to over a million dollars. He was awarded the Gilbert J. Sullivan Distinguished Service Award for his contributions to the Glee Club in 2016.

Deal with Douglass List at the 140th Reunion Weekend 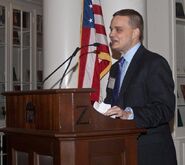 Deal speaking at the Rotunda Dinner (2013)
Community content is available under CC-BY-SA unless otherwise noted.
Advertisement