Prior to the founding of the Virginia Women's Chorus, there had been various choirs of women's voices at the University, most notably the Madrigal Group of the early to mid 1940s. However, the choirs lacked consistent membership and gained no institutional stability until after the institution of undergraduate coeducation in 1970.

The Virginia Women's Chorus has frequently collaborated with the Virginia Glee Club in performing large choral works for mixed voices, as well as in joint appearances at Family Weekend "choral showcase" concerts and the Glee Club's charity SingFest concerts.

This list includes individuals who were identified as members during various Glee Club collaborations and is based on concert program records. It is not a complete list. 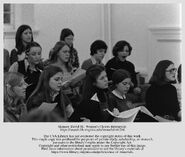 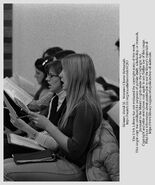