As president, Seid dealt with the controversy around the traditional song From Rugby Road to Vinegar Hill stemming from its inclusion in a Rolling Stone article about an alleged gang rape at Phi Kappa Psi fraternity house at the University of Virginia.[1]  Seid announced that the Glee Club would retire the song from performance for at least the remainder of the Glee Club 2014-2015 season and potentially the Glee Club 2015-2016 season; he later clarified that a vote of the membership would be called to confirm a permanent ban on performances of the song.[2] 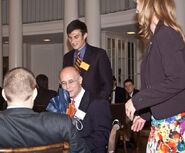 Retrieved from "https://virginiagleeclub.fandom.com/wiki/Zachary_Seid?oldid=32963"
Community content is available under CC-BY-SA unless otherwise noted.